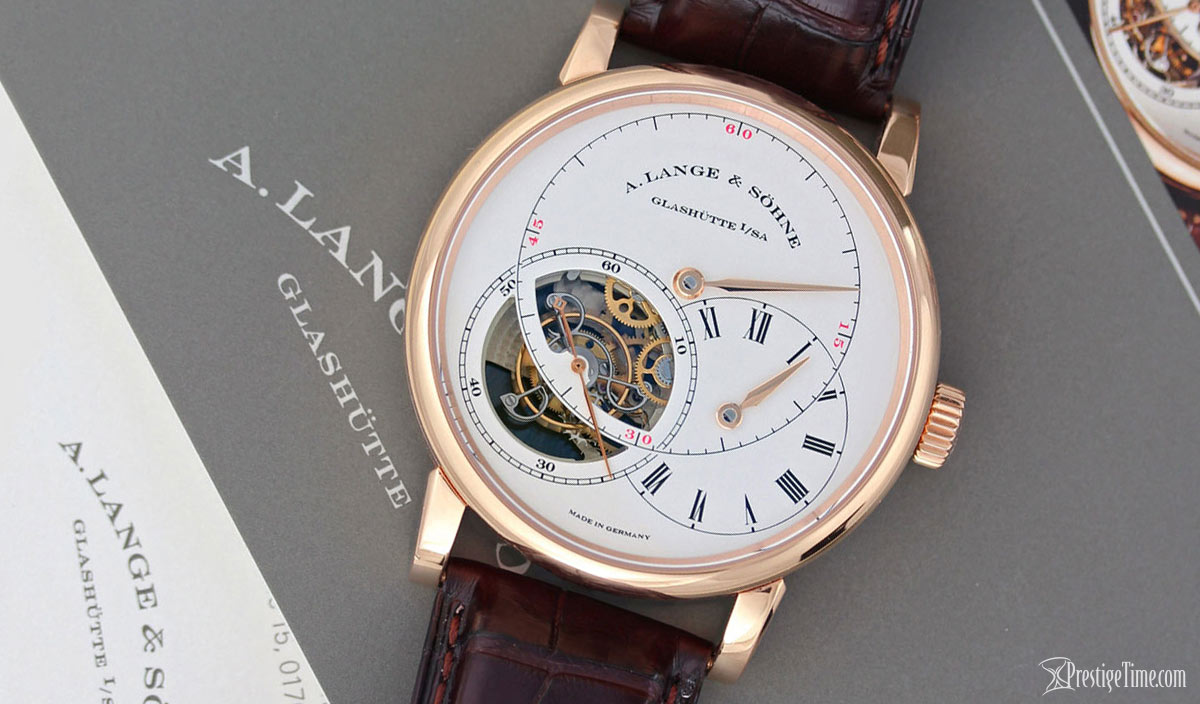 There are those who debate that A Lange & Sohne is the world's best watchmaker and that the only reason they aren't is that they aren't a Swiss watchmaker but rather German. This review may shed some light on where that opinion is coming from. The Richard Lange Tourbillon Pour le Merite is perhaps the type of watch that gives merit to those opinions.

With a list price tag of $211,700, one would expect to get a whole lot of watch. That's exactly what this German-Saxon watchmaker intended. In fact, this watch model# 760.032F is a tribute to the founders and pay homage to Adolph Lange and his firstborn son Richard Lange who passed away in 1932.

The boldest and most noticeable feature that you can see by looking at the dial is the 60-second tourbillon which takes up the bottom left quadrant of the watch dial. The very same area which hosts the tourbillon doubles up as a small second sub-dial. Much attention was given to weight distribution on the silver dial. The bold Roman numerals on the hour's dial on the bottom right-hand corner of the watch and the use of thicker and more pronounced rose gold hands than on the small second's dial offer a contrast to the depth of the tourbillon and the visual weight that it carries. The minutes sub-dial is centered, aligned to the top and takes up 3/4 of the dial's height. A black printed minute track has 4 roman numerals used and they are printed in red at the 60, 15, 30 and 45 minutes positions. The A. Lange & Sohne logo is centered in the top 3rd area of the sub-dial and the name Glashutte I/SA centered beneath. 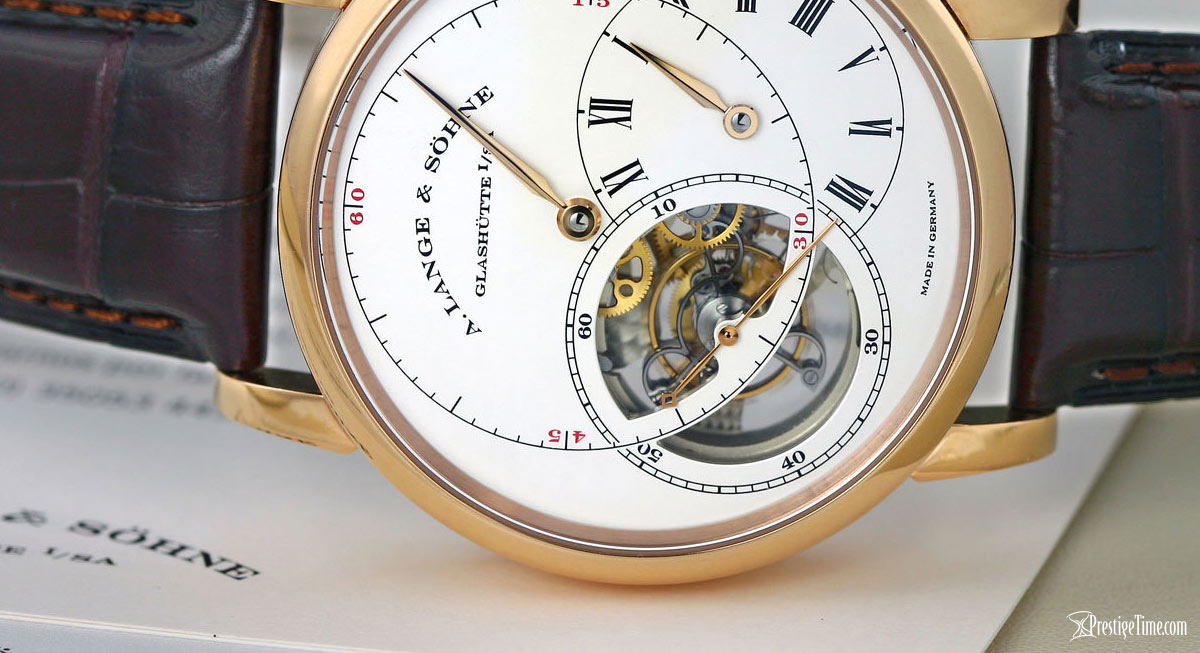 Why am I harping on the dial so much? Let me tell you the most interesting feature of the dial. The offset hours sub-dial has a cutaway portion at the position which would normally be hosting the Roman numerals VIII, IX, and X. This are of the dial is a pivoting dial segment which comes into view at 6 o'clock and at goes back into hiding at 12 o'clock when that portion of the dial is no longer necessary. There is quite a bit of mechanical action happening on the dial between the 3 sub-dials, the tourbillon, and the pivoting dial segment.

Let's go beneath the dial and take a look at what's under the hood of this incredibly striking luxury watch. The Richard Lange Pour Le Merite Tourbillon has a stop-seconds feature allowing you to pull out the crown to activate a V-shaped spring that stops the second hand enabling you to set the time precisely.

This tourbillon complication is comprised of 84 components and is lightweight at only 1 quarter of a gram. The tourbillon is housed in a cage that is polished black and this finishing takes 5 days to flawlessly complete. Everyone knows that Lange takes their watches to the next level when it comes to finishing, it's no state secret. The function of the tourbillon is to compensate for the drag generated on the movement when the watch is held in different angles. Having one improves precision.

How do they hold their weight when it comes to the actual micro-mechanics in their watches? This watch solved one of the problems that mechanical watches experience when it comes to the laws of physics. The spring that powers the movement is known to have the most energy when fully wound and significantly lower energy when it's wound down and the tension in the spring is lost.

How does A. Lange & Sohne Solve this?

This watch has a regulator complication. Let's take a closer look at the energy transference which is regulated by a fusée-and-chain transmission. What this does is, it maintains a constant force of energy throughout the entire wind, from fully wound until it is completely wound down and will always transfer power at an exact rate.

This chain which looks like a miniaturized bicycle chain is 152mm long and is made of 636 tiny parts, which creates a total of 212 links. The chain can be seen in action through the 3/4 plate from the transparent sapphire case back of the watch.

The number of parts that actually went into this caliber is mind-blowing. Factor in the 352 parts and then you have the chain, which has 636 additional parts. We're looking at 988 parts all together! 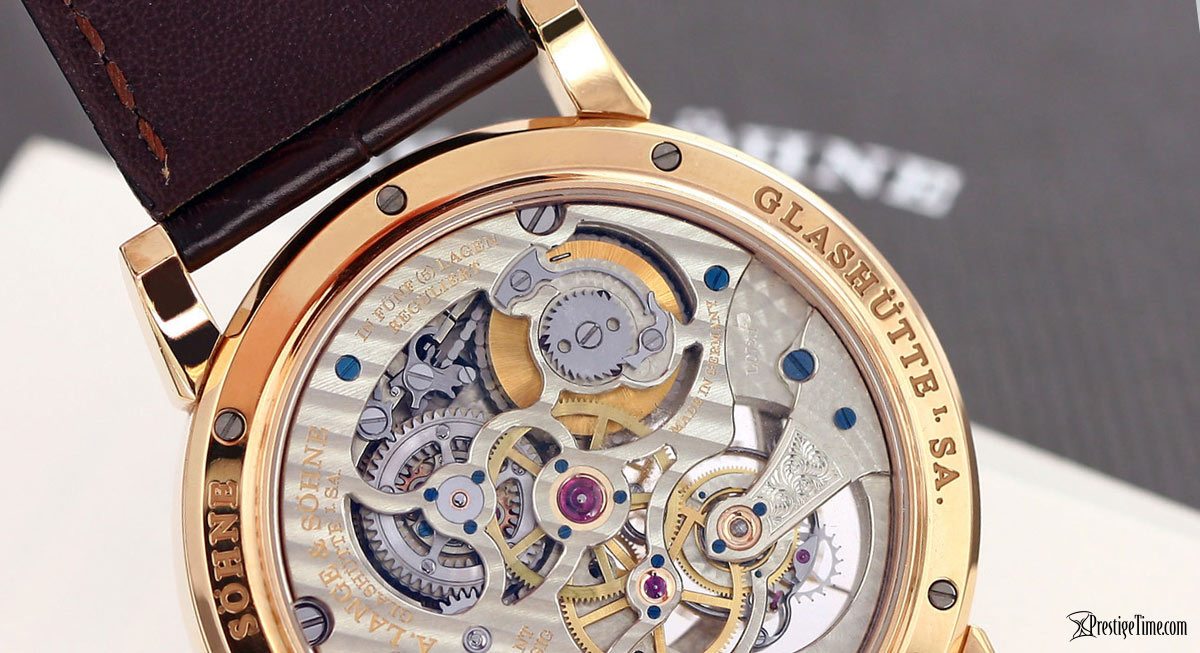 This 33 jewel movement is nothing short of extraordinary to watch in action and breathtaking to see. The balance cock is hand engraved giving each watch its own unique look and the movement like all A. Lange & Sohne calibers is finished to perfection. Another striking feature of the caliber is the signature blued screws that you'll often find in German watchmaking. The case is made of solid 18kt Rose Gold and is 12.2mm thick and is just short of 42mm at 41.9mm in diameter. Although the case is solidly built, it doesn't offer much water resistance with just 30m/100ft of resistance.

The L072.1 caliber has an approximate power reserve of 36 hours and the movement can be seen through the transparent case back. The case is made of solid 18kt Rose Gold and is 12.2mm thick and is just short of 42mm at 41.9mm in diameter. Although the case is solidly built, it doesn't offer much water resistance with only a 30m/100ft resistance.

An 18kt rose gold deployant buckle is used to fasten the deep brown leather alligator strap and is branded with the name LANGE in an uppercase serif font. The leather band is stitched together with a lighter hue of brown thread. All in all, this is truly a remarkable piece and a great conversation starter. 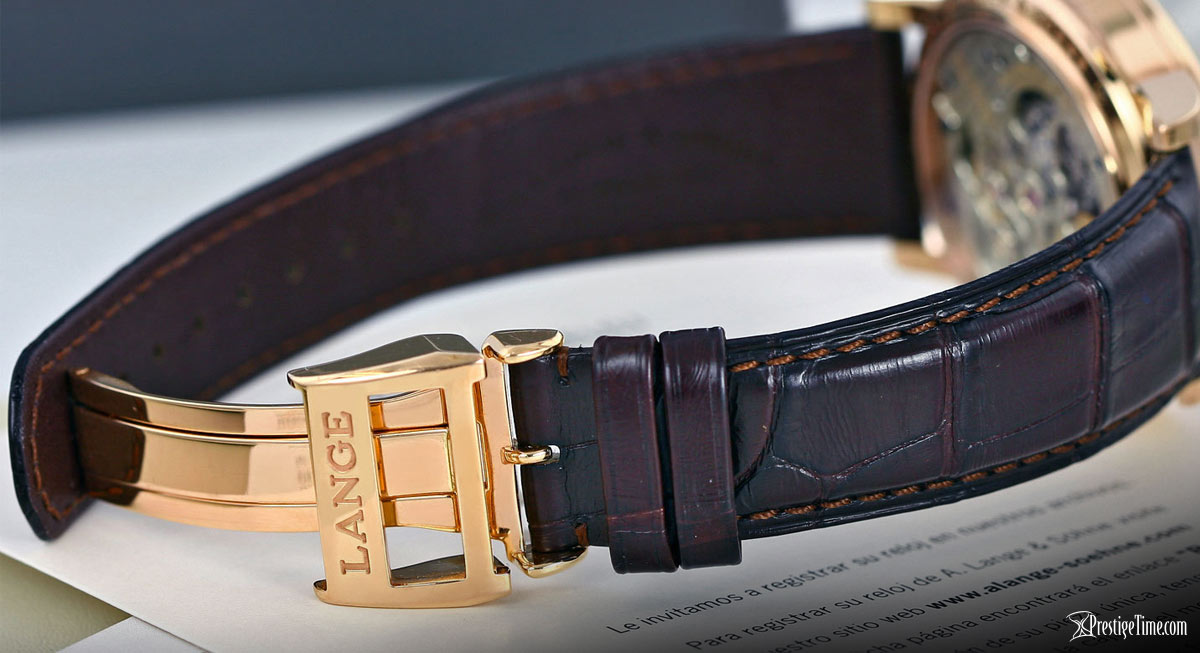 One of the things that have me fascinated about this dial is the beauty in the design and how the dials and subdials all overlap one another giving this complicated watch a minimalist look similar to the up and coming watchmaker who just happens to have their manufacture across the street from Lange, Nomos. Is this just a coincidence? You decide! 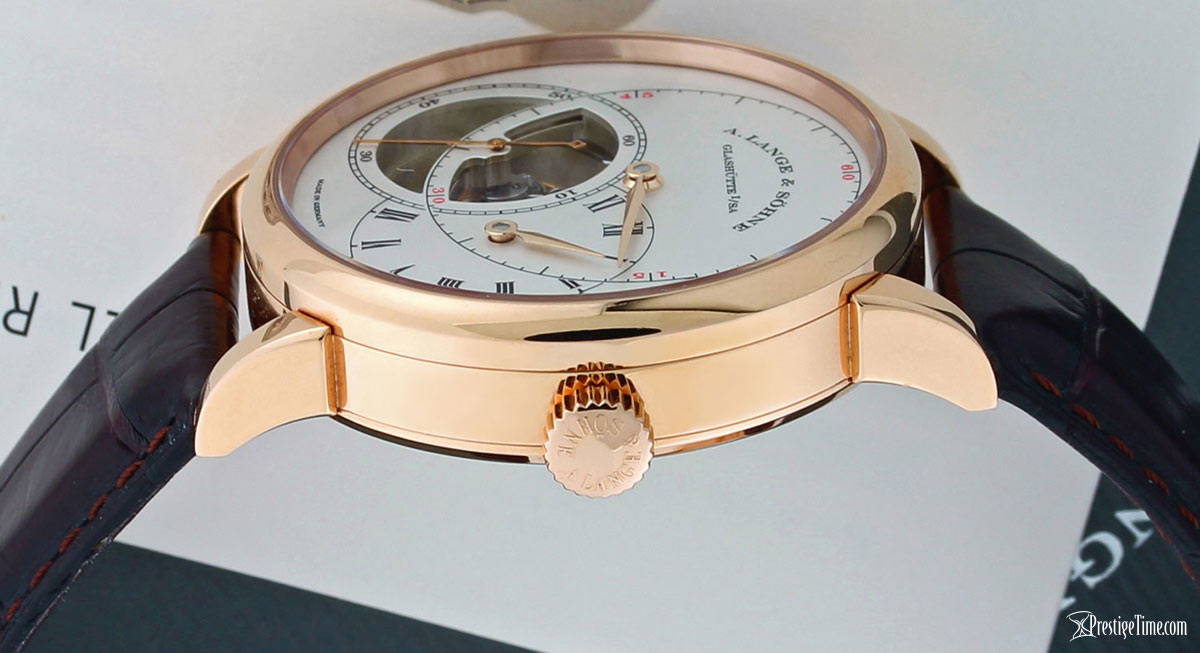