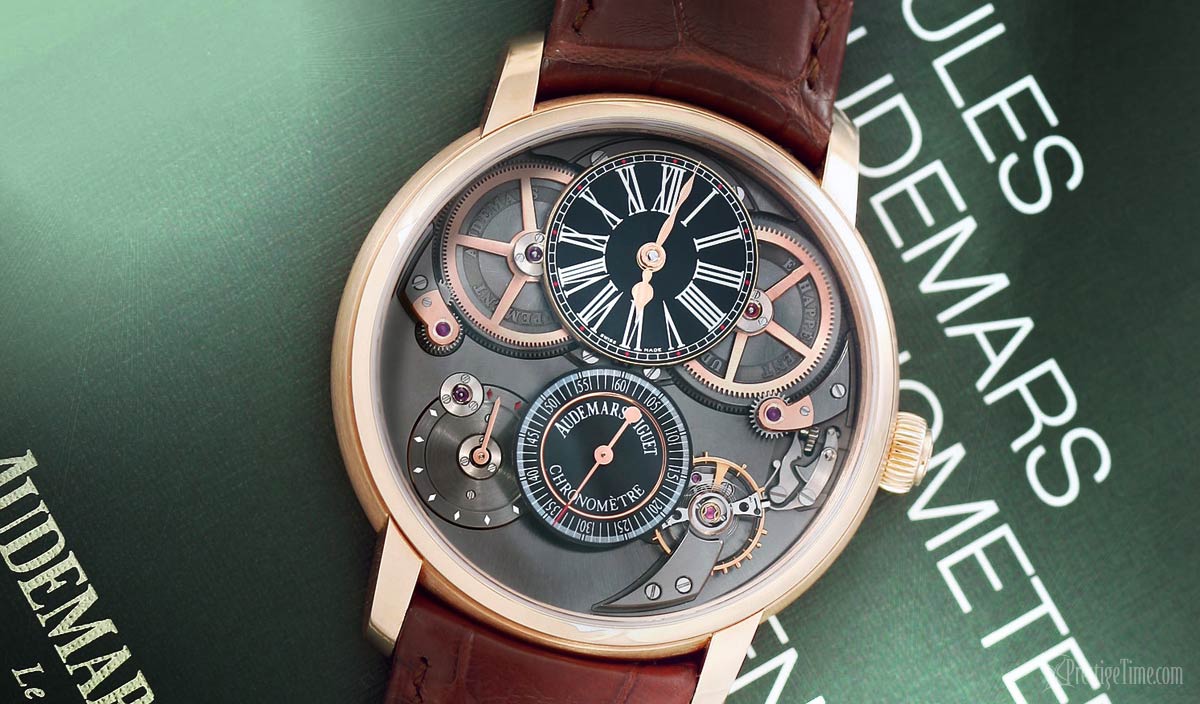 When speed and precision are of the essence Audemars Piguet rolls out an extra high beat manual wind watch. Read our review of the Jules Audemars Chronometer 46mm with the AP escapement.

Every so often a major player in watchmaking excites all of us with something seriously praiseworthy. Today is one of those days where we get to review the Audemars Piguet Jules Audemars Chronometer 46mm with the AP Escapement.

This is a watch that is as wondrous on the outside as it is on the inside. It's a solid gold watch which carries the weight of a heavy metal. Although you can feel how solid it is on the wrist, it actually wears very comfortably. The case flank is slightly curved and the lugs slope down slightly on the sides. The watch comes with an alligator leather strap and unlike the Royal Oak, it has an articulated pin buckle. 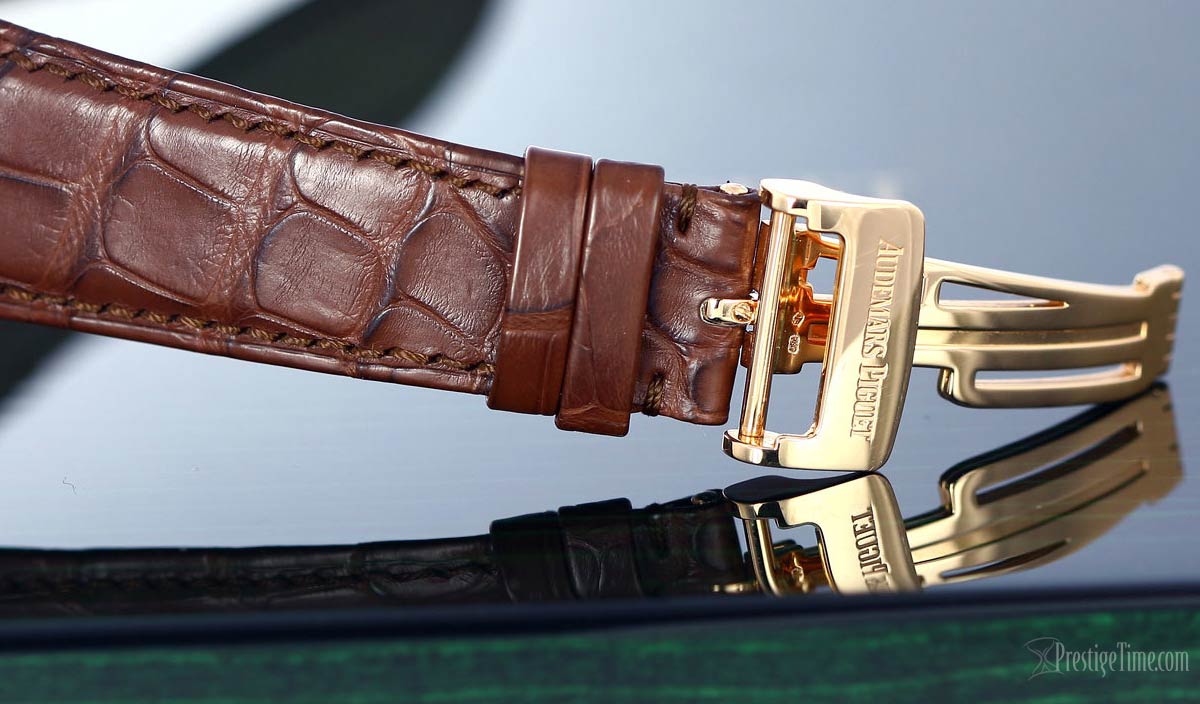 The case is pretty large and thick. There are even those that would compare the proportions of the case to that of a hockey puck at 46mm in diameter by 12.7mm thick.  It's solid gold so you can expect a gold watch this size to feel on the heavy side. To give you an depiction of the thickness see the image below.

The Movement: The Audemars Piguet 2908 caliber

This is a very visually striking watch and features a caliber that is comprised of 267 components at 33 jewels and has a power reserve of approximately 90 hours.

There's a specific reason why they named this after the Audemars Piguet Escapement, the platform escapement seen through the dial. It's just that good. Instead of a traditional Swiss impulse lever, this direct impulse escapement uses less energy by placing the lever offside the escapement mechanism and using it as a switching mechanism which opens and closes the flow of power between the balance and the escape wheel.

This allows for a higher beat 6Hz watch that can vibrate at 43,200 VpH without the use of an explosive amount of energy as with standard escapement. If you tried running a traditional escapement at 6Hz, the lubricants would spray all over the place whereas the AP escapement allows less energy to accomplish higher vibrations. This, in turn, gives the movement higher accuracy and precision. See video below.

The dial is something you will marvel at for hours on end ( and the same applies to the case back by the way). On the dial, you can see a power reserve indicator, the twin mainspring barrels on either side of the dial, small seconds sub-dial, and the Audemars Piguet escapement in the lower right corner which was originally conceived in the 1700's.

This is a massive dial and has a larger than life look but one that is perfectly balanced. 18kt white gold guilloche rose-laid dial and as with all naturally beautiful things; you can find the Fibonacci sequence in the pattern. The Grande faux enamel dial is a very difficult process to achieve. The enamel dial has a huge rejection rate due to the intense heat at a temperature of 800 degrees.

When produced, these enamel dials often crack and bubble in the fire and therefore, for each one that comes out flawless and is then placed on a dial, you can rest assured that they are tough as nails. The enamel dial uses Roman numerals and a railway minute track and leaf shaped hands. 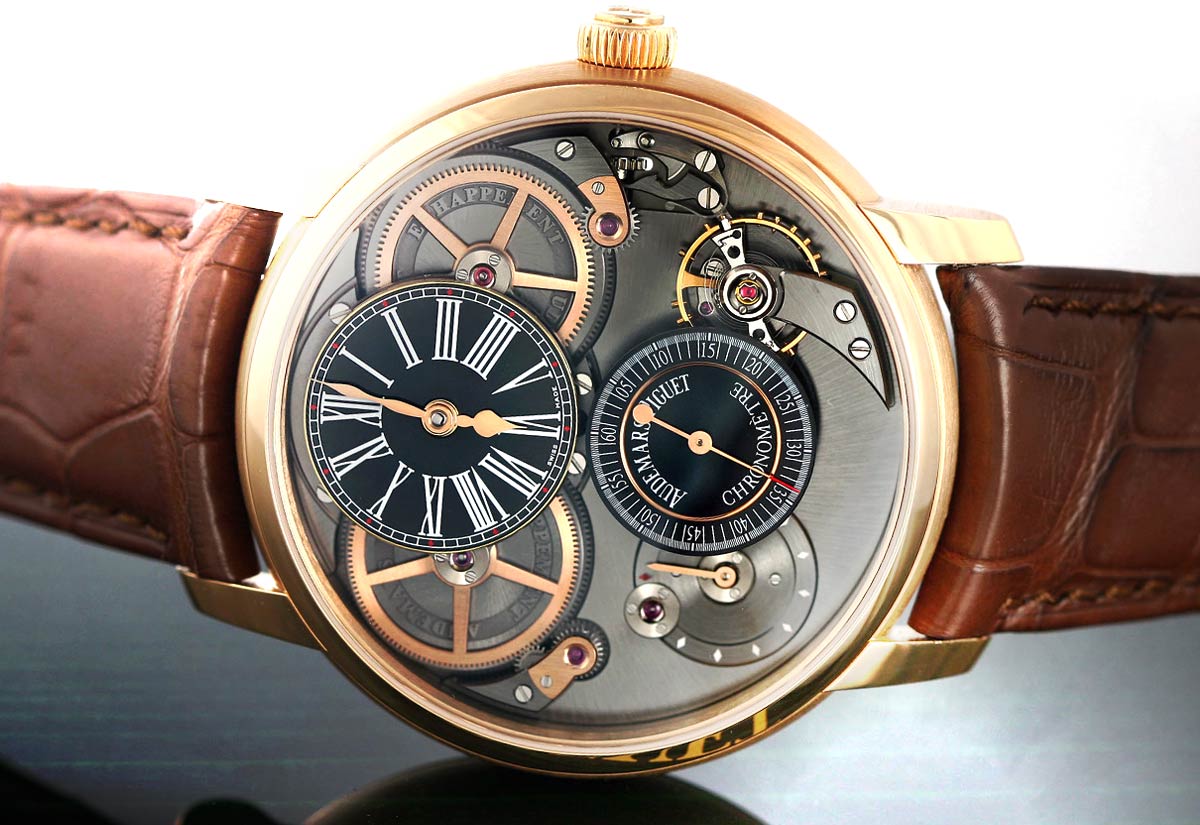