It’s the final countdown for the TAG Heuer Monaco Calibre 12 Chronograph. This is the Final Edition so let’s review this watch in-depth before it's too late.

The Monaco chronograph has always been one of the more recognizable watches from this Swiss watchmaker. Tag Heuer created this collection long ago and has had tremendous success with it. This includes one famous model that was worn by actor Steve McQueen throughout the years is had a few “engine” upgrades and changes but the overall look stayed the same.

Several different models and movements from mechanical to quartz were seen since its original release way back in 1969. It even had a few special and limited editions throughout the many decades of its existence.

One noteworthy movement that was found in the Monaco collection is the automatic movement known as the Calibre 12. Seeing as this article is about the Final Edition of Monaco that runs on the Calibre 12, this may be your last chance to have one. This one has the reference caw211j fc6476 and is a limited edition that is limited to only 1,000 pieces only. Let’s take a close look at the design of the watch before popping open the “hood” to see what’s inside. 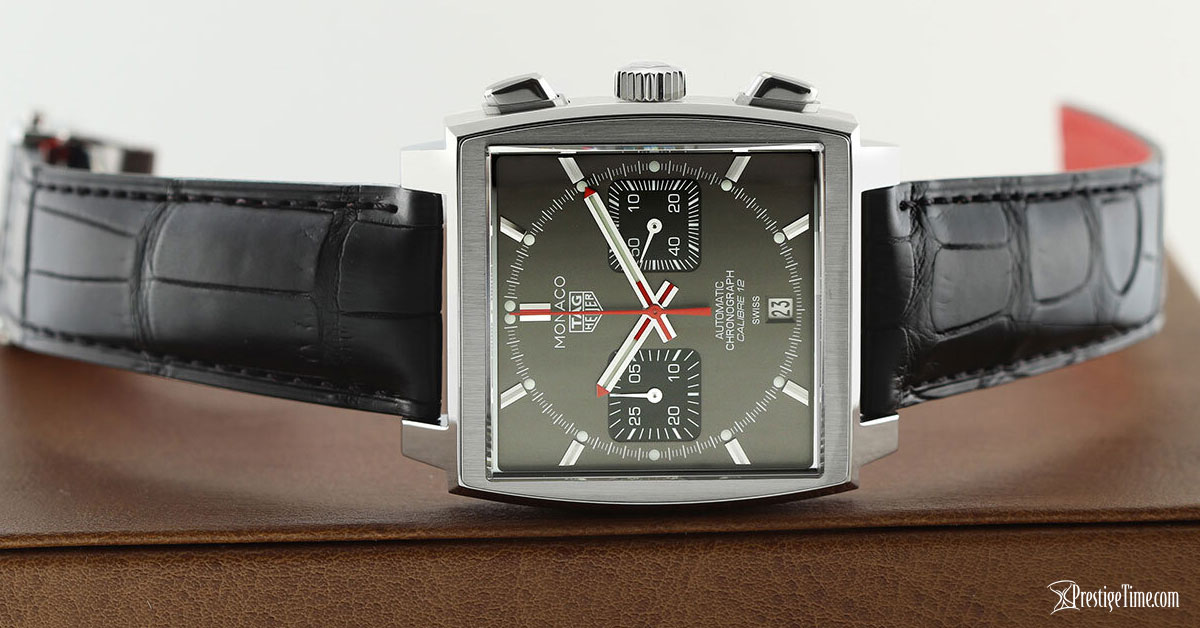 The hour markers are punctuated by a luminous dot which is aligned to the center of the white, finely printed seconds and split seconds track. This is true for all hour markers except for the 12 o’clock hour marker. This hour marker is also polished but has a bright red center and sits lower on the dial resting just above the branding which is printed in white and centered and middle aligned in the upper half of the dial.

Two rounded square-shaped sub-dials have a black background and use white printed numerals and indices. The one to the right functions as a small running seconds sub-register. 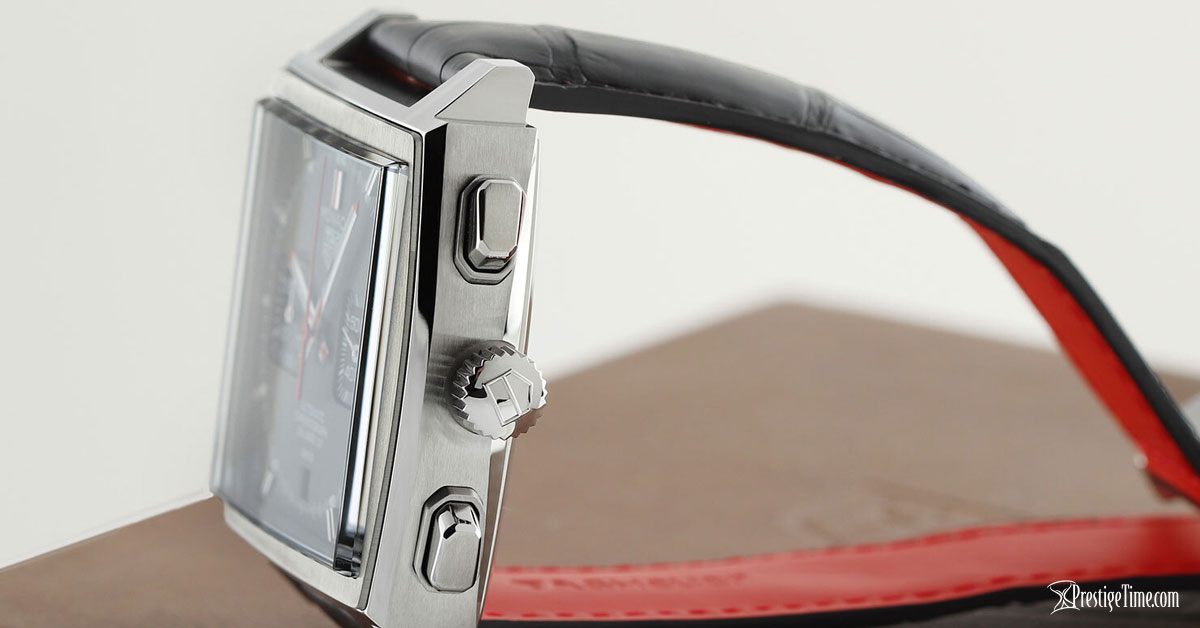 The 39mm x 39mm stainless-steel case offers a water resistance rating of 100m/330ft which is okay for some swimming, a cold shower, or snorkeling. It has a combination of brushed and polished finishing and although it is technically a square shape, it’s not perfectly square since the sides are bowed; kind of like a tonneau (barrel) shape. The flat part of the front and back of the case has a vertically brushed finish with polished bevels.

Smooth polished rounded chronograph pushers can be found above and below the polished winding crown. The pushers have a brushed steel band at the point where it meets the case.

Both the front and back of the case use a transparent scratch-resistant sapphire crystal. The case back is fastened with 4 screws and has some special engravings such as the names of the series and the number of the limited edition. Through the sapphire crystal, you can see the mechanical movement in action.

The Calibre 12 is beautifully finished and uses a Cotes de Genève striping pattern that rides vertically up the weighted automatic winding rotor. The rotor has two rounded triangles skeletonized on either side.  It also has some black paint filled engravings of the TAG Heuer wordmark, the words ‘Calibre 12’ and ‘SWISS MADE’. Other plates in the movement use Perlage, a circular brushed pattern.

The TAG Heuer Calibre 12 is essentially an ébauche movement that had an SW300-1 base and a +/- 40-hour power-reserve duration. It is a 4Hz watch with a beat of 28,800 VPH that contained 59 jewels. It features a column-wheel chronograph module from Dubois-Depraz which is a popular choice from many high-end watchmakers.

For watchmakers looking for a chronograph module, it’s usually a choice of either a Dubois-Depraz module or an ETA 2894-2 when an integrated module is not an option. This also helps to keep the watch marketable and within a certain target price range. Another added benefit is that this chronograph is easier to service compared to the ETA 2894-2. 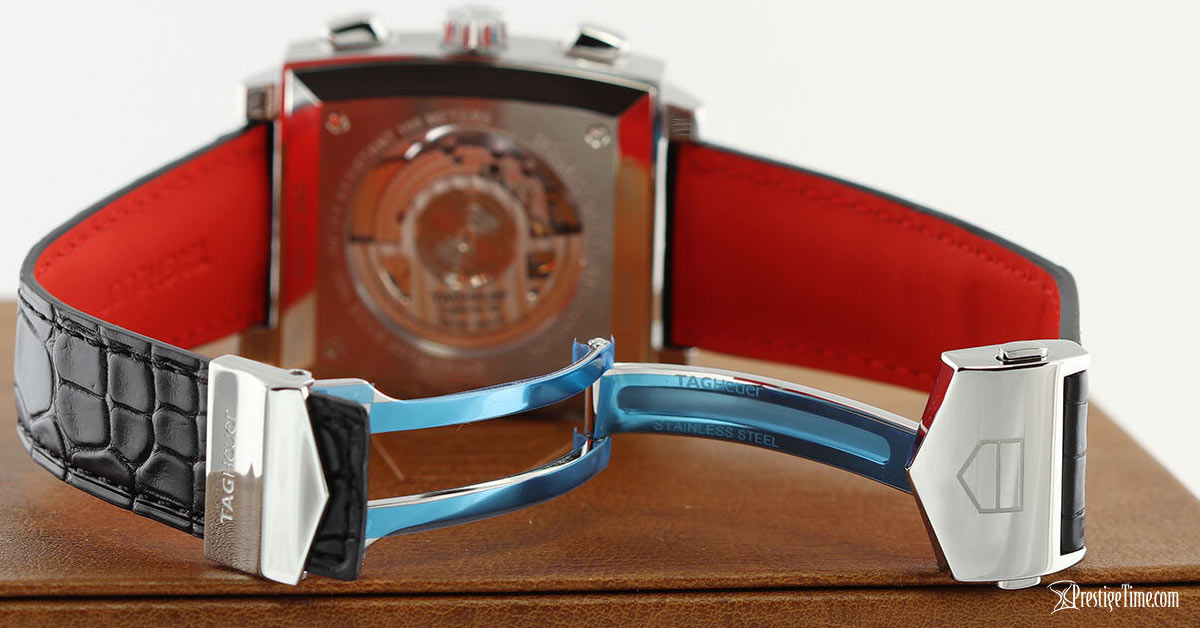 The watch comes on a black alligator leather strap with black stitching. The inner side of the strap has a bright red calfskin leather lining with red stitching to match. The alligator leather band is fastened by stainless steel push-button folding buckle with the TAG Heuer branding on one side and the Heuer Icon on the other.

Click one of the buttons below to get more information or to contact us about pricing on this watch.