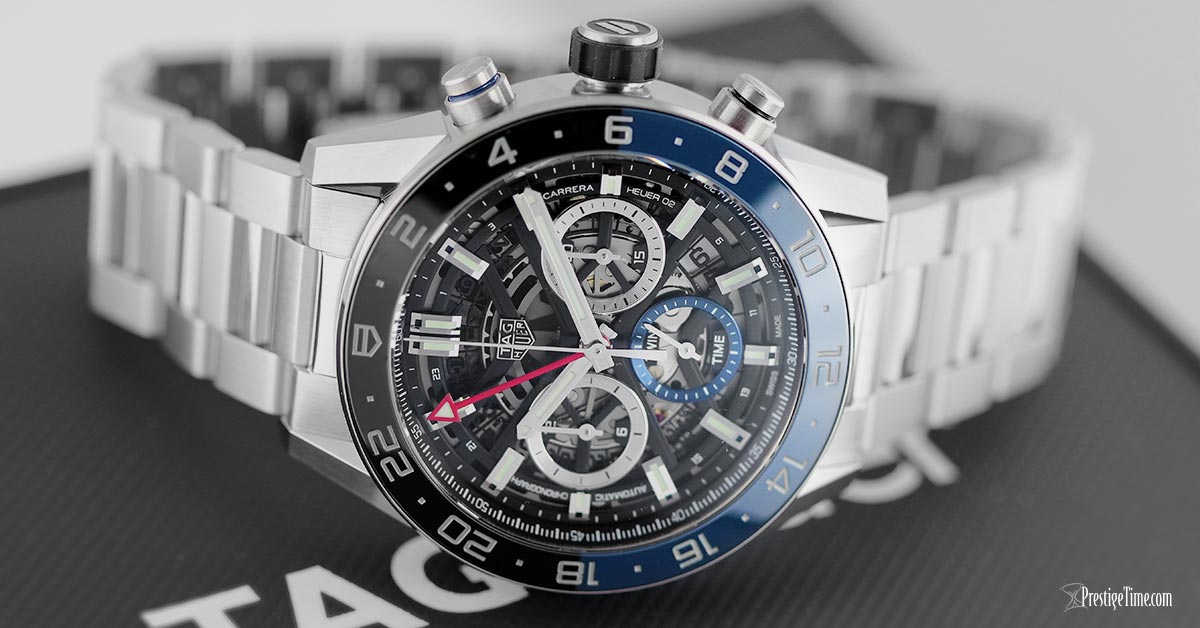 Those who have been following TAG Heuer the past few years have seen big changes happening.

At first, there was the introduction of the Heuer 01, then the Heuer 02T and now the 02 GMT Twin Time. Let’s get you acquainted with a new era in the evolution of TAG Heuer’s tradecraft. The Caliber Heuer 02, which is based on the CH80 from the late 1960’s is found in several watches such as the recently re-introduced Autavia. However, today, we’re looking at a different series; the Carrera Calibre Heuer 02 GMT 45mm.  Let’s begin, shall we?

TAG Heuer was always well known for their chronographs. Therefore, don't be surprised that all the next big calibers are also chronograph movements. The Heuer 01 and the Heuer 02 all have stopwatches. Some derivative calibers like the Heuer 02T Tourbillon Chronograph have higher complications at an unbelievably low price for the type of complication it contains and for its chronometer designation, the prestigious COSC certified pedigree.

In general, the Heuer 02 watches have a very similar skeletonized look as the Heuer 01’s that preceded it and except for perhaps the Autavia Heuer 02 and the Heuer 02 Hiroshi Fujiwara limited edition, all dials on the TAG 02 powered watches were skeletonized.

When was the Heuer 02 introduced? The thing is, TAG Heuer first announced their intention about rehashing the CH80 back in 2014 but focused their attention on the caliber 1887 based Heuer 01 for quite some time before revisiting the Heuer 02. They had first rolled out some tourbillon models which used the 02T which as a marketing strategy, got them the attention of watch enthusiasts all over. This was a smart tactical move since soon thereafter, they announced their more mainstream TAG Heuer 02 GMT Twin Time watches. 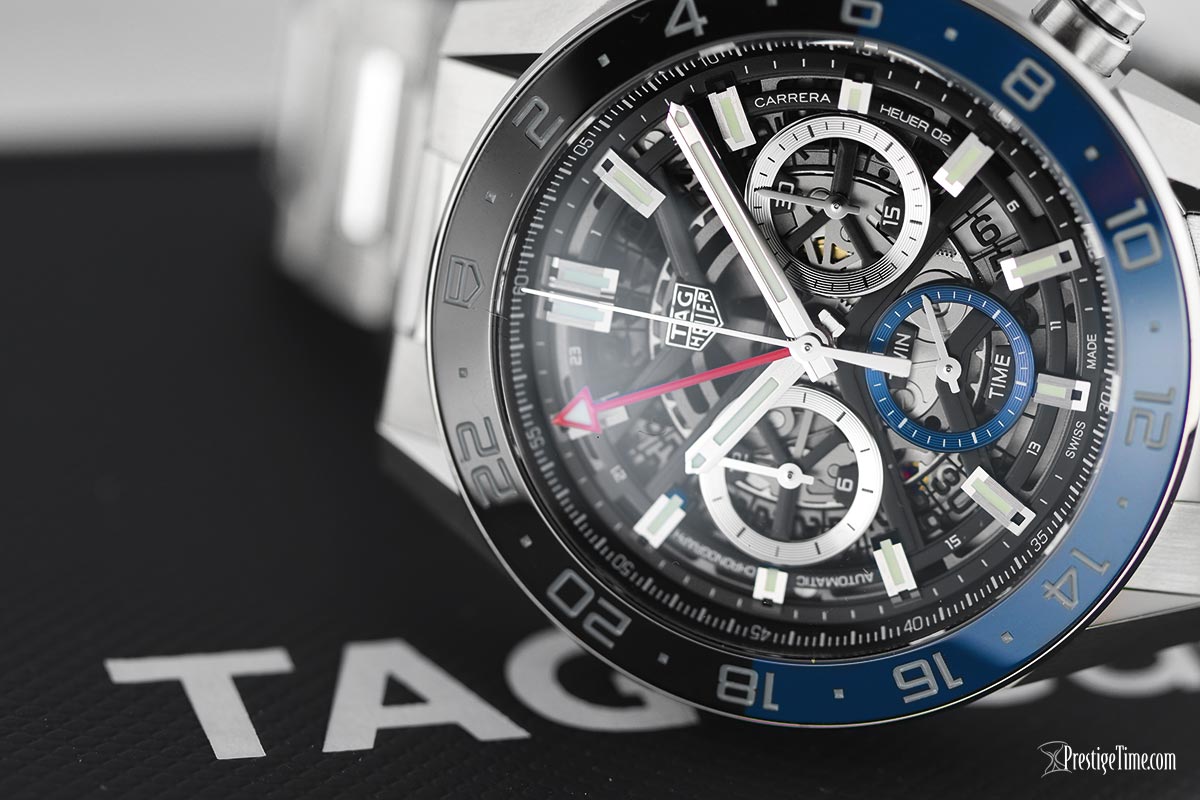 Now that TAG Heuer had everybody’s attention, they hit them with a more practical watch at a significantly more attainable price point. Doing this in exactly this order brought up the prestige of the caliber 02 tremendously and maybe not-so-coincidentally, just before the more affordable models hit the open market, making the Carrera 02 GMT 45mm Twin Time more desirable and noteworthy.

In the past decade, the winds have been slowly changing in the watch industry, and many watchmakers who relied heavily on The Swatch Group for supplying them with their ETA movements or ébauche movements have been denied calibers if they were a brand under the conglomerates umbrella and have thereby been forced to be more independent or at the very least, become more resourceful.

However, with TAG Heuer’s rich history in watchmaking this has become less of a challenge and in fact, quite an opportunity. Things have been looking on the up and up, starting with the Heuer 01 which was based on the 1887 caliber. Now, with the Heuer 02 making all sorts of waves, watchmakers and horology enthusiasts are starting to look at TAG Heuer with a reverence that they truly have earned over the years. Let’s get a close look at the caliber and see why this is something special. Shall we?

Looking at the movement is half the fun but getting to know it is the other half. As with all 02 powered chronograph watches, the column wheel allows for very smooth action and keeps the starting and stopping of the hands from being jumpy the way you would find on most CAM actuated chronograph mechanisms.  This metallic red column wheel can also be seen through the transparent case back. 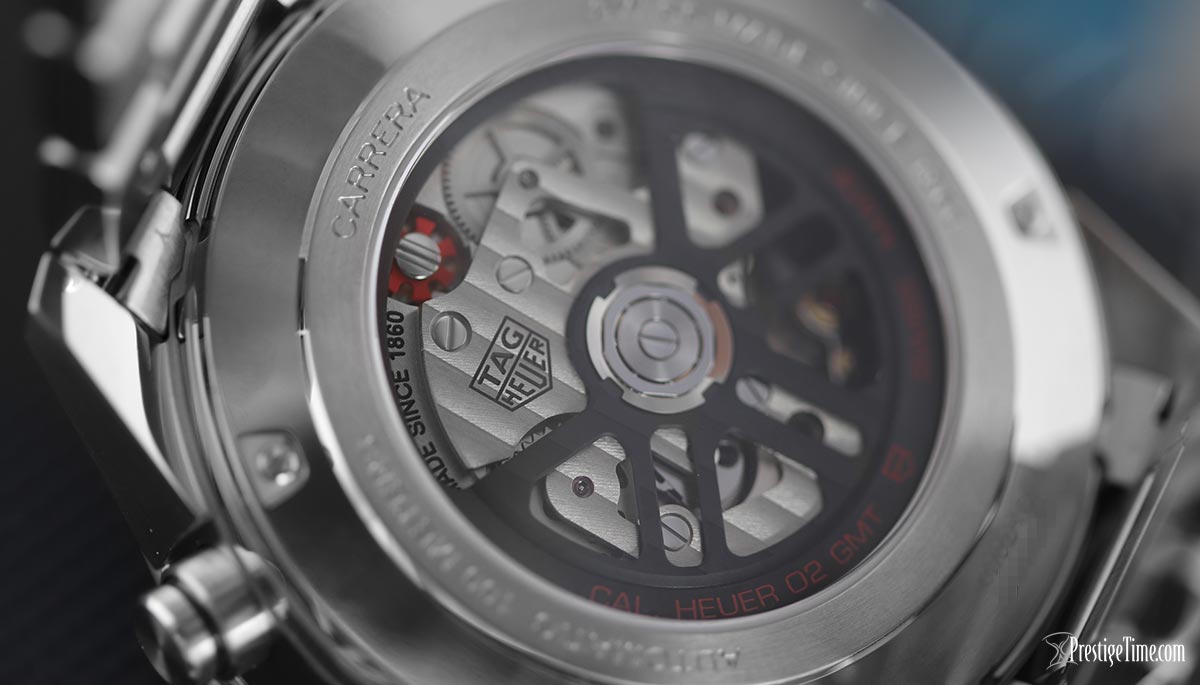 The mechanical movement itself is sporty and beautiful. It’s finished nicely with Cote de Genève striping and a skeletonized black rotor with a finely brushed finish and red engraved lettering. The caliber is a 4Hz movement which beats at 28,800 VPH. It contains 39 jewels and has an impressive power reserve of approximately 80 hours.

There are currently two available models: one is on a brushed and polished steel bracelet with model # cbg2a1z.ba0658 and the other is on a rubber strap with a deployant buckle which is model # cbg2a1z.ft6157.

The dial layout is spectacular with a blue-rimmed small running seconds sub-register at the 6 o’clock position perfectly centered. The whole design is very symmetrical. Silver rimmed chronograph sub-dials are on either side of the dial at the 3 and 9 o’clock position. Luminous brushed and polished applique index hour markers are placed at each hour marker position, with a double marker at the 12 o’clock position. White finely printed seconds and split seconds track is printed around the dial flange. 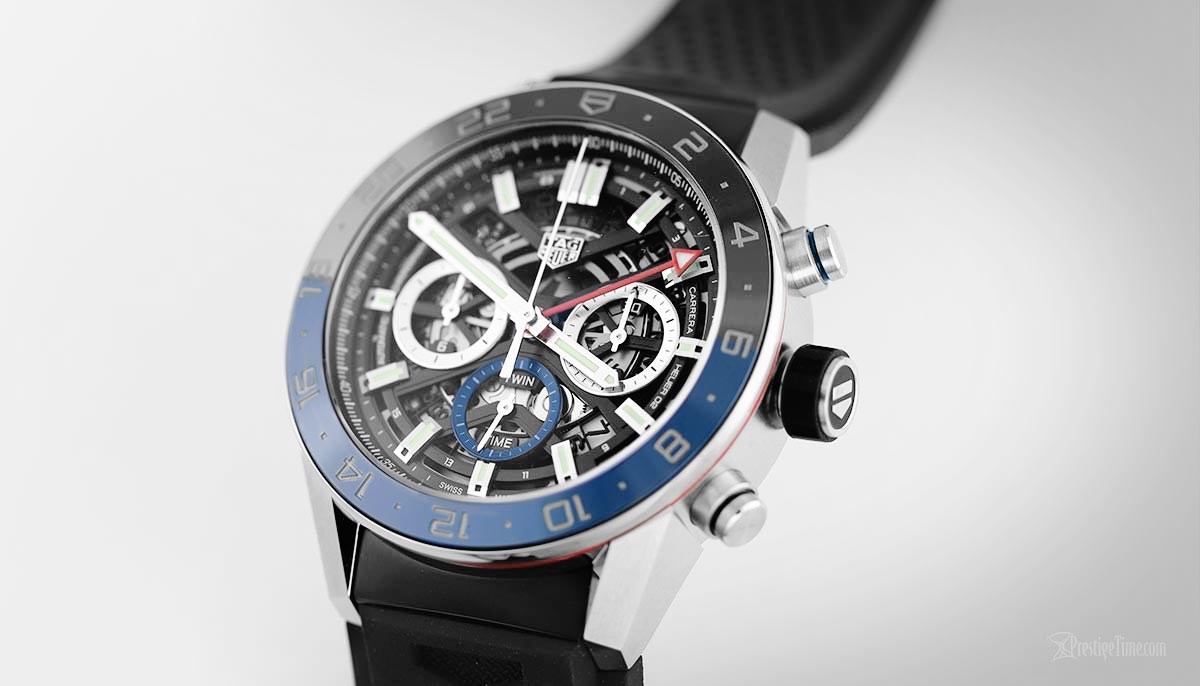 Even the lettering is positioned in a way to keep everything perfectly balanced with the words “Carrera Heuer 02” on the right side between the 2 and 4 o’clock positions and “Automatic Chronograph” on the left between the 7 and 10 o’clock.

A bright red central GMT hand has an arrowhead design and is filled with luminous material. The GMT hand rotates only once every 24 hours and points to the white 24-hour numerals which can be seen printed between the luminous index hour markers.

The date window sits between the 4 and 5 o’clock position and uses a skeletonized black plated stencil style font for the numeral which passes over a white background to accentuate the date.

One of the most noticeable features of this watch is the split tone scratch-resistant ceramic bezel which has an almost cobalt blue hue for the bottom half of the bezel and black for the upper half. The bezel has 24-hour indicators engraved around the bezel.

This color combination is something that made one of the most popular Rolex watches so famous, the GMT BLNR also known as the Batman Rolex GMT.  However, the TAG Heuer 02 GMT 45mm is nothing like it. It has its own unique and distinct look. They have no need to piggyback off the success of another already successful watch from a more popular brand. The Carrera Caliber Heuer 02 GMT is perfect just the way it is. 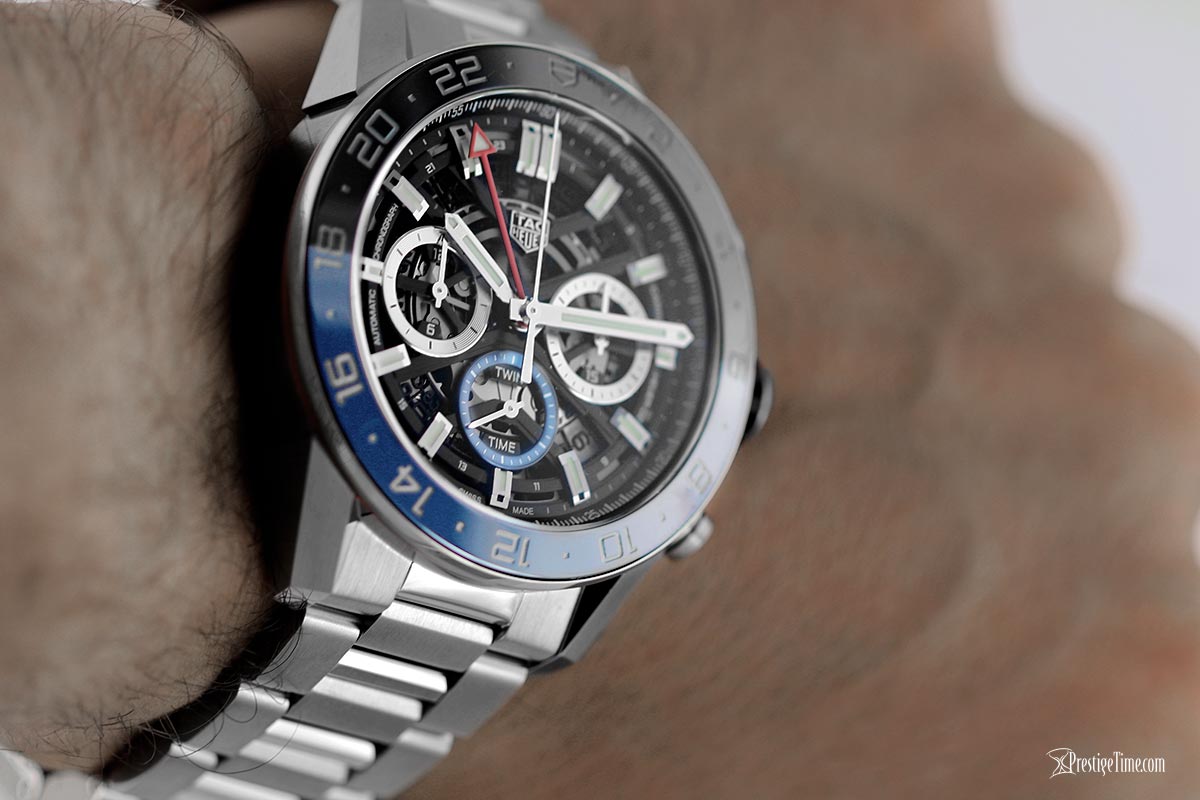