What's the connection with a soft drink and the Red & Blue Rolex Pepsi watch? Find out now!

Rolex is the only expensive watch company that has not just one but two watches that are nicknamed after soft drink. Of course, we're talking about the Rolex GMT Master II watches that have the split two-color dials. This particular review is focused on one, the 18kt white gold 116719 BLRO with the blue and red bezel known as the "Pepsi" and if you got one of these watches then "You got the right stuff, baby!" 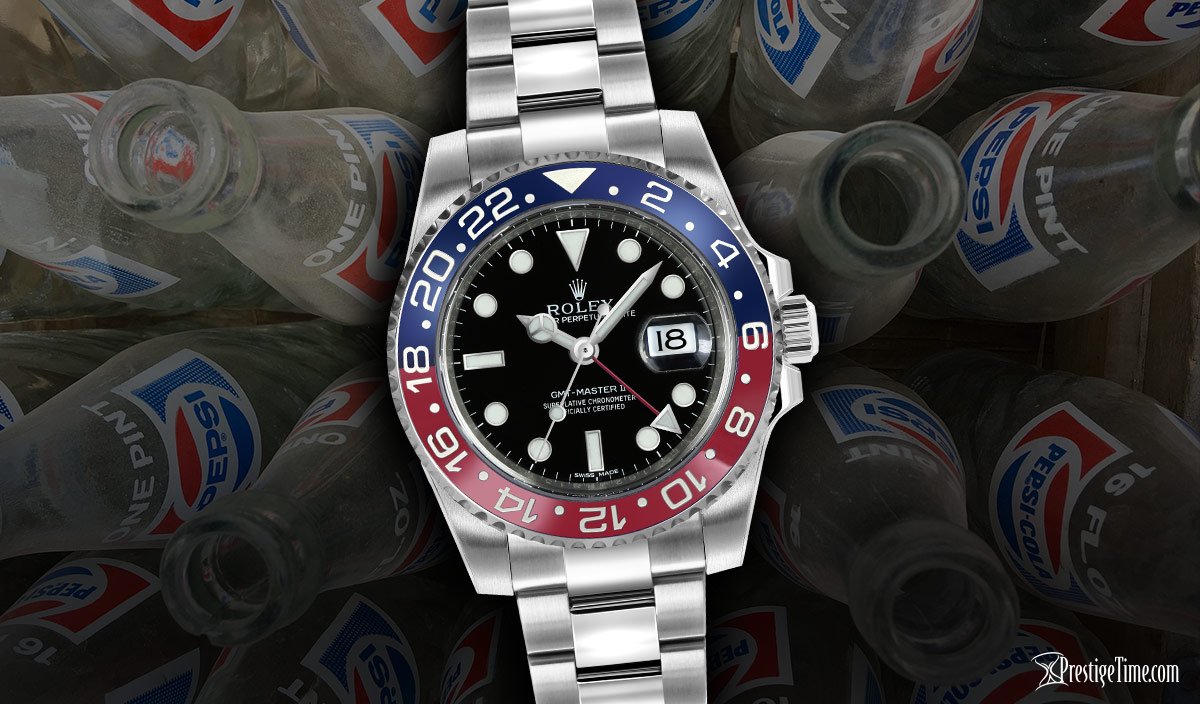 One of the things that differentiate the GMT Master II from the older GMT series is that Rolex implemented the Cerachrom bezel insert. The advantage if this new bezel is that it's made of a highly scratch-resistant hardened ceramic material and it has UV repelling properties so that colors won't fade when exposed to ultraviolet rays ...even for a long duration.

In the olden days of watchmaking, when bezels were made entirely of metal, there were obvious challenges for Rolex to come up with this new ceramic material and Rolex had to really think outside of the box.

One can truthfully say that Rolex was never accused of was being uncreative with their manufacturing or lacking in the innovation department. They've been consistently doling out new patents that improved watchmaking from the very beginning of their existence.

Another fine example of such innovation is the Rolex Easylink 5mm extension link found on the bracelet of this watch. This allows you to make a quick 5mm adjustment to the size of the bracelet to compensate when the wrist naturally expands and contracts with fluctuations in temperature and humidity.

You won't find any surprises under the cap of this Pepsi though. The Rolex GMT Master II has its dependable Superlative Chronometer under the hood of this bad boy. The Rolex Caliber 3186, a 31 jewel movement, holds its power for approximately 50 hours and beats at a rate of 28,800 VPH.

Rolex has had two-tone bezels for over fifty years. From the older Rolex Pepsi bezels to the "Coke" bezel (which were red and black) to the very popular black and blue bezel model of the GMT Master II. The most recent addition to the soda pop themed GMT Master II watches is the Rolex GMT Master II Rootbeer which has a brown and black bezel. It's a tradition that I think will stick.

In addition to soft drink names, this watchmaker has a few watches with superhero names in it such as the Hulk with a green bezel (come to think of it, they could have called it the Sprite Rolex or the Mountain Dew...) and of course, Batman with the blue and black bezel.

The Rolex GMT Master II "Pepsi" watch has a GMT complication also known as a dual time zone feature. Do you notice a red hand below? This is the GMT hand. It is a mechanism that allows you to see the time in two different time zones simultaneously. It is ideal for those globetrotting jet-setters that are always traveling to (or even calling) places in different time zones. 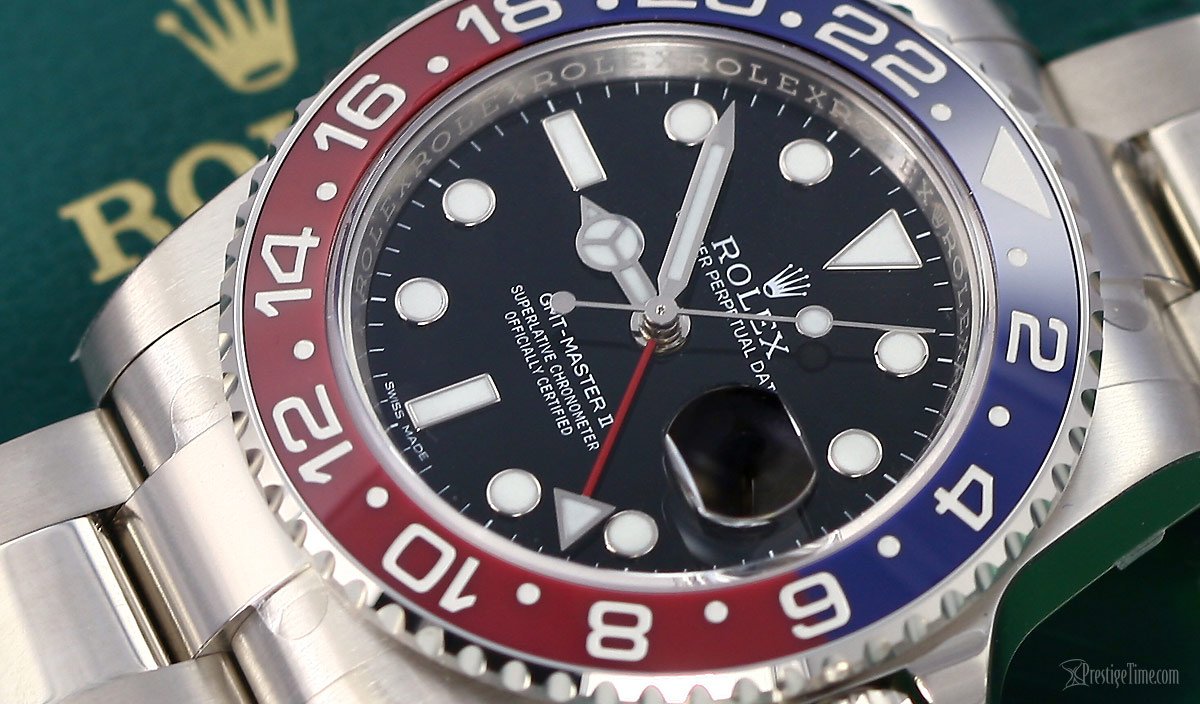 The Rolex Pepsi GMT Master II is a 40mm watch and uses a patented "Triplock" crown that fastens the case as tightly as a submarine hatch. This keeps the movement, the Rolex caliber 3186 well protected. The 31-jewel movement has an accuracy of +2/-2 seconds per day which is phenomenal for a mechanical watch and it, therefore, has the designation of Superlative Chronometer.

One of the features of the movement which contributes to the enhanced accuracy is the magnetic resistance of Rolex's blue Parachrom hairspring and the use of a Breguet overcoil (also known as the Breguet spiral) which keeps the balance spring in line and helps to compensate for lateral shocks. Its purpose is similar to Rolex's patented Paraflex shock absorbers found in some of their other watches such as the Datejust II which has the caliber 3136 movements.

Just like a real Pepsi soft drink, the 116719BLRO is super sweet and it's not your run-of-the-mill Rolex. It looks great on the wrist and has a unique look that will grab the attention of many. It's solidly built and has practical features which include the date window with cyclops magnifier lens over the date and also have a GMT function.

In the meantime, have a look at the full specs of the Rolex 116719 BLRO, and just for the sake of making a comparison, we'll place it next to the 116710 BLNR Rolex "Batman Dial" with the black and blue bezel.