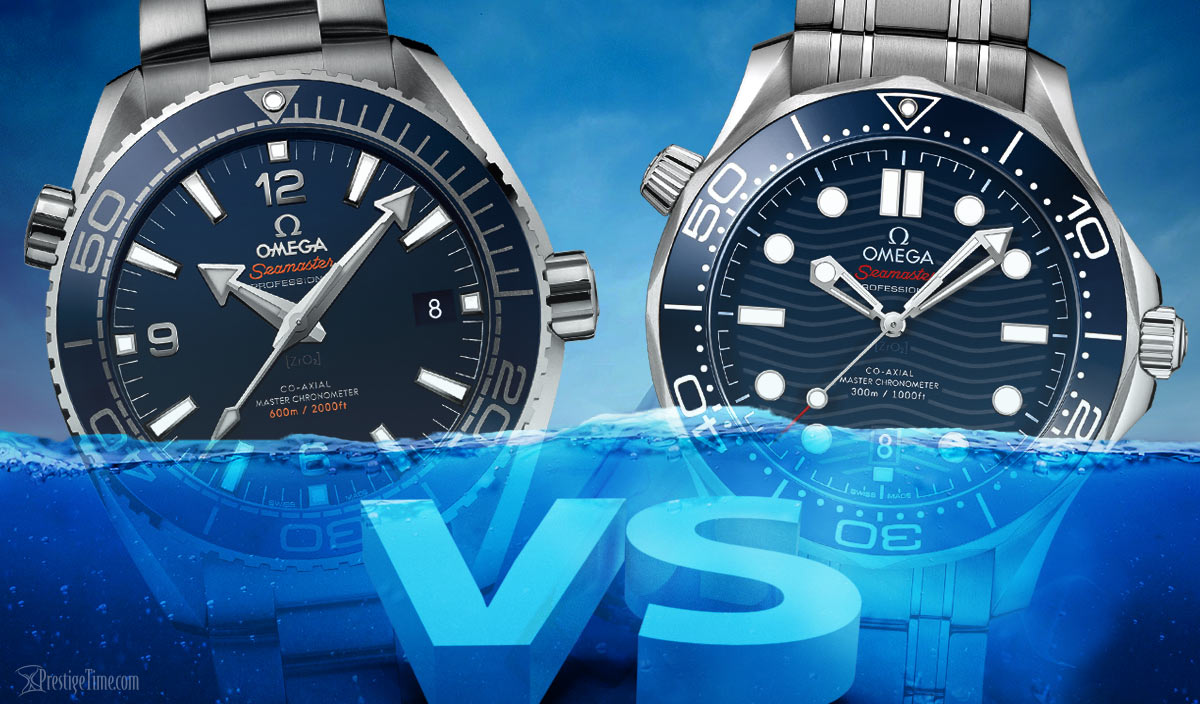 Which is a better diver's watch?

Use this comparison as a benchmark to determine which one is a better diver's watch. You will also figure out which of these two dive watches is the best to suit your individual needs.

You already know that the difference between owning the right equipment and the wrong equipment in professional diving can be a difference of life and death. Because of this risk, there are times when a deep-sea dive kit needs to be upgraded with newer or more reliable diving equipment. When you have to choose the perfect diving watch for your kit, you can easily experience information overload on the web. By reading this you will be comparing two very popular Omega diver watches while seeing the information you need in an easy to read and quick to compare format. Want to know why James Bond chose to wear these watches? It’s to get the inside scoop in the comparison below.

The good news is that many good features have been added to both watches. For starters, today they are both super accurate due to mechanical changes on the inside of the watch. Mind you, Omega’s models from several years back were also pretty precise but now they have extremely high accuracy.  The company made sure that both now feature a more modern ceramic bezel, more legible numerals and hour markers, and a helium escape valve.

For starters, the Planet Ocean is a great all-around watch and will look as great while you're wearing a tuxedo as it does when you're in your wetsuit and up to your neck in dive gear. That being said, there are certain specifications and unique features that differentiate the Planet Ocean from the Seamaster. One of the first things you may notice is that the hands-on the Planet Ocean is arrow-shaped. It uses a very glossy black zirconium oxide ceramic dial. They even engraved ZrO2 just under the middle of the dial below the hands. In addition, it has a more luminous fill and a slightly larger dial. All the above makes the Planet Ocean 600m much easier to read under low light conditions such as the deep sea.

The Planet Ocean is METAS and COSC certified. This means that the 39 jewel caliber 8900 movement which powers this watch has more accuracy than a standard COSC certified caliber. After receiving the COSC designation it goes to the labs at METAS (the Swiss Federal Institute of Metrology) for further testing on its water precision, resistance, and resistance to magnetic fields up to 15,000 gausses. The Caliber 8900 movement has a power reserve of approximately 60 hours.

It's important to note that the previous models of the Seamaster 300m Diver, produced until 2017-2018 are powered by the older Omega caliber 3300 movements and are not METAS certified. The newer 300m Diver watches produced since 2018, on the other hand, do have the new METAS certification just like the Planet Ocean.

Price
Costs substantially more than an Omega Seamaster 300m Diver
Case Size
It's a larger watch at 43.5 mm and may look bulky on smaller wrists

The Omega Seamaster collection, as a whole, has been around a bit longer than the Planet Ocean and comes in a large variety of styles, shapes, and sizes. The Omega Seamaster is a great-looking watch that you’re able to wear on your wrist each day, and like the PO, can be worn with a wetsuit as easily as in formal-wear. For your average diver, this is the perfect diving watch and is also much more affordable than the Omega PO. On the other hand, in terms of features and specifications, it doesn't measure up to the Planet Ocean if you are a pro diver.

For starters, the water resistance is only half of that of the Planet Ocean and that is enough for most people. However, if you plan on going real deep during your next dive this watch may fall a little short. Another noticeable difference is that the bezel on the Omega Seamaster has less of a grip than that of the Planet Ocean. This series also has a Chronograph version that comes with an added stopwatch function. These SM Diver 300m Co-Axial Master Chronometer Chronograph watches are essentially running on the caliber 9900 which is the same caliber that powers the new Planet Ocean Master Chronometer Chronograph watches.

Magnetic Resistance
Si14 silicon balance spring is magnetic resistant
Bracelet
Has a new bracelet design with a nice polished & brushed finish and contains more vertical links in the design.
Price
The Omega Seamaster is more affordable than the Planet Ocean

Water Resistance
The Seamaster 300m has a great water resistance but it pales in comparison to the Planet Ocean 600m which has twice the resistance and can therefore be taken to greater depths underwater than the SM 300.
Single Barrel Movement
The Seamaster has a great movement (Omega caliber 8800) with a single barrel design but it doesn’t quite compare to the double-barrel Omega caliber 8900 movements that are found in the Planet Ocean. The power reserve on the Seamster comes up short by around 5 hours approximately at only 55 hours compared to the Planet Ocean's 60 hours. Not a huge difference, but worth noting.

Side by side comparison of the Omega Planet Oceans VS Seamasters specifications, features, and more.